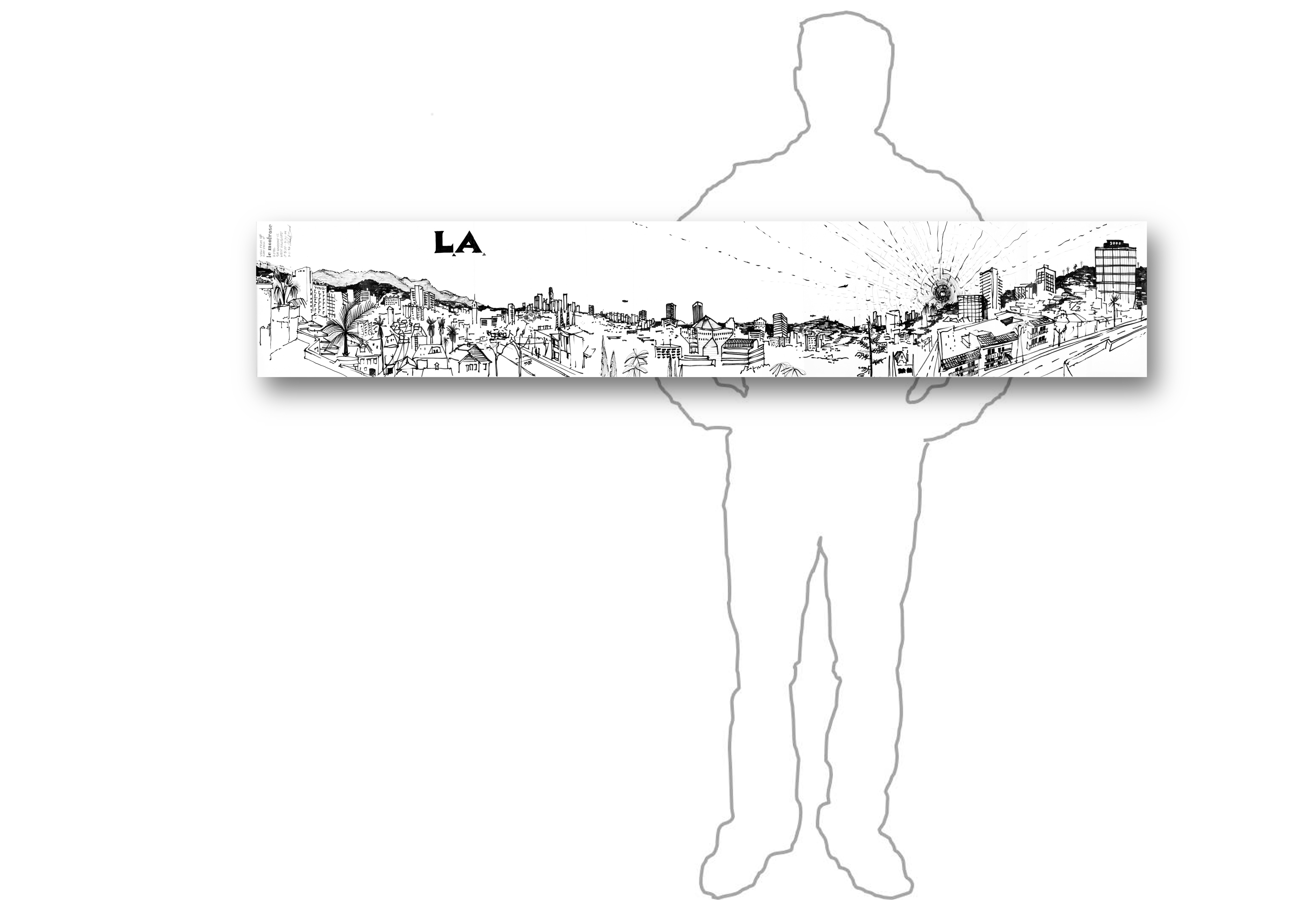 We can learn from a horizontal vehicle-centric city.

This sketchbook is over six feet long and includes a 360-degree panorama from the rooftop of Le Montrose Hotel in West Hollywood. In 1996 when I captured this scene, hybrid cars did not exist. The city had the burden of a sprawl of freeways and cars bumper to bumper. While home and business owners can do little at this point about the lack of viable public transportation, the community of Los Angeles, like a significant portion of California, has embraced energy efficiency. Hybrid cars adorn the freeways, and residents of LA are turning lemons into lemonade. I lived and worked in California and applaud the appetite for sustainability.

Los Angeles, like many US cities, had electric streetcars during the first half of the twentieth century. From the late 1930s up to about 1950, companies like National City Lines (NCL) took control of the electric streetcar systems in about two-dozen cities. NCL’s investors included the top US companies with an interest in fossil fuel and automobile transportation, such as Standard Oil, General Motors, and Firestone Tire. Over about a decade, NCL converted many of the electric streetcars to buses. In 1949, most of the companies were convicted of conspiracy to monopolize interstate commerce due to the sale of buses, fossil fuel, and supplies to NCL. However, they were acquitted of conspiring to monopolize the transit. While conspiracy theorists blame the companies for the decline of electric public transit, there are many other factors that were involved such as fixed-rate streetcar fares and the Great Depression.[i] Regardless of the conspiracy theories, the reduction in the number of electric streetcars and the increase in the roads and automobiles changed the transportation system in American cities, and the companies may have just accelerated the decline.

Author and illustrator: Charlie Szoradi is an architect, inventor, and the CEO of Independence LED Lighting. He writes about many other topics related to public transportation like electric streetcar systems through his extensive travels around the world.

If you have found this posting online, it is an excerpt from Mr. Szoradi’s book Learn from Looking that served as the inspiring seed content for this drawing share resource. For additional drawings and insights on transportation ranging from bullet train to electric streetcar technology, we hope that you enjoy exploring LearnfromLooking.com. You can search via general terms such as sustainability as well as narrower terms such as electric streetcar and National City Lines.